In this hyper-partisan environment, I can’t think of an organization that better fits the definition of bipartisan than the Committee for a Responsible Federal Budget.

Their mission is to keep the federal budget process honest and responsible.

The Committee has just released a comprehensive evaluation of the leading Democratic candidates’ health care plans.

It is required reading for any serious health policy wonk. Disbelieve their work at your own peril.

Here are their two summary charts on coverage and budget impact: 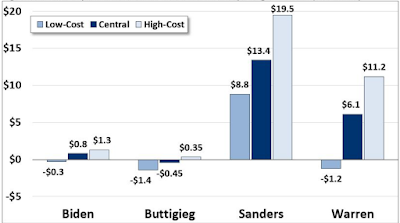 This first chart summarizes the net fiscal impact of each candidates plan on the deficit between 2021 and 2030:

The primary reason Buttigieg’s plan has a lower cost than the similar Biden plan is that Buttigieg is more aggressive in controlling drug and provider prices.

The Committee has also qualified its estimates:

“Our estimates are rough and rounded, based on our best understanding of how campaign-level detail translates into specific policies, and subject to change as more details are made available.”

That is a reasonable qualifier since the candidates’ proposals are typically a few pages long in outline form––not the sort of legislative proposals that would follow later and could be scored by the CBO.

The second chart estimates the impact on coverage each plan would have: 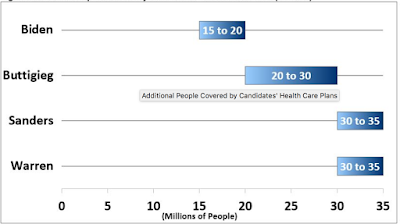 Taking this report at face value, Buttigieg would appear to offer voters the best bang for their buck––Buttigieg covers almost as many people as Sanders and Warren and does so as the only candidate that pays for his program.

However, Buttigieg’s rosier outlook depends upon his taking substantially more money from the drug industry and health care providers than does the similar Biden plan and Buttigieg also brings back the very unpopular individual mandate––all very politically problematic.