Americans continue to give the Affordable Care Act a split decision, with 50% telling Gallup they approve of the healthcare law brought about by President Barack Obama, and 48% saying they disapprove. 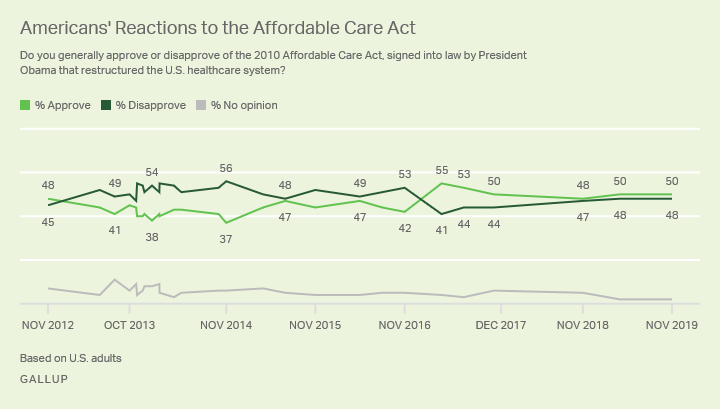 The latest data are from a Gallup poll conducted Nov. 1-14.

Since Gallup first asked about the Affordable Care Act with this wording in 2012, public opinion has gone through three general phases. 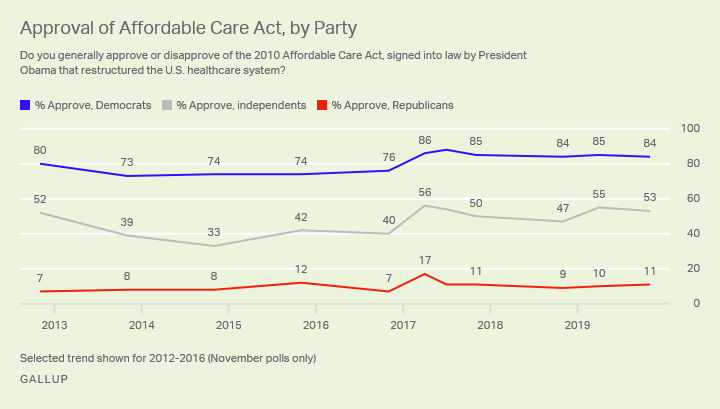 Support for ACA Higher Among Those With Preexisting Conditions

While the sharp differences in ACA ratings along political party lines are well established, Gallup also finds that those who report having private insurance are as likely as those on a Medicaid or Medicare plan to say they approve of the ACA.

Also, Americans who report having a long-term illness or disease that a health insurance company would consider a “preexisting condition” are more likely to approve of the ACA (55%) than those who do not suffer from such a condition (49%).

The ACA continues to divide Americans. In the early years after its troubled rollout in 2014, the law failed to receive approval from most Americans. While the law enjoyed a brief period of majority approval while Trump and the Republicans unsuccessfully tried to repeal it, 2018 and 2019 have shown a more divided outlook among the public on the law commonly known as “Obamacare.” Despite claims that the law would somehow break the private insurance market, Americans with private as well as publicly funded healthcare plans equally approve, and disapprove, of the ACA.