Facebook has launched a new feature to help track what preventive health screenings might be recommended for you based on your age and sex.

The tool, called Preventive Health, rolled out in the United States on Monday and focuses specifically on cardiovascular health, cancer screening and seasonal flu — making recommendations such as when to get a cholesterol test or where to get a flu shot.

Facebook’s Preventive Health tool provides recommendations related to your cardiovascular health and cancer risk.
Facebook partnered with the American Cancer Society, American College of Cardiology, American Heart Association and US Centers for Disease Control and Prevention in order to build the tool with the most up-to-date, accurate resources and information.

“We are looking at the number-one and number-two killers in America, which are heart disease and cancer, and we’re also looking at seasonal illness, particularly flu in this case,” said Dr. Freddy Abnousi, a cardiologist and head of healthcare research at Facebook

“The majority problem that we’re trying to solve is making sure that people have this information in their hand in a way that’s consumer friendly,” he said, adding that when he thinks about this new tool, he thinks about his father.
“He had blood pressure problems for a long time,” Abnousi said about his dad.

An instrument like the Preventive Health tool could help someone like Abnousi’s father manage their cardiovascular health care with blood pressure screenings, for instance.

My hope is that if this was around then, he would pull it up on his phone — and though he’s too proud to talk to me about it or maybe doesn’t feel comfortable talking to a primary care practitioner about it — he would be able to understand it on his own and realize that it’s important enough for him to engage in it,” Abnousi said. 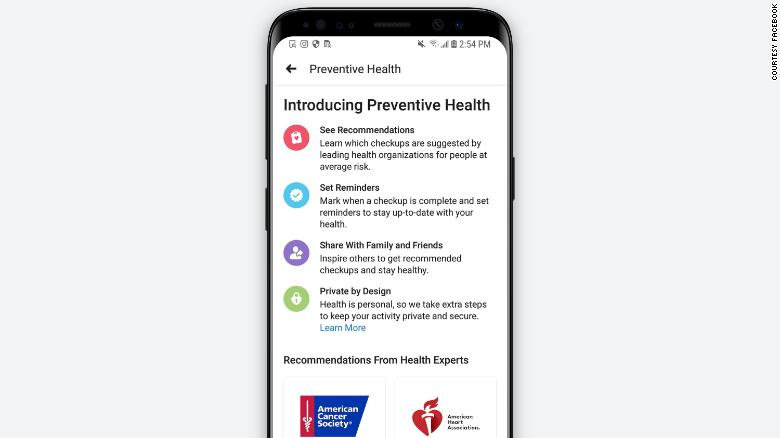 Facebook’s Preventive Health tool allows you to set reminders or share the tool with family and friends.
The Preventive Health tool, currently available only in the United States, can be accessed by either searching for it on Facebook or clicking on a promotion that might appear in newsfeeds.

The tool then provides personalized recommendations for what you should consider as part of your preventive care for heart disease, cancer and seasonal flu.

When you are provided with your personalized recommendations, which only you can see, you then have the option to learn more information; mark the recommendations as completed, if you already have done some of them; or set checkup reminders to schedule future tests. The tool itself also can be shared with friends to increase awareness of preventive care.

Most of the preventive measures recommended by the health groups that Facebook worked with are covered by insurance, but it’s important to keep in mind that “not everybody actually has access to primary care across the country,” Abnousi said. “So we also wanted to help in the access logistics.”

The Preventive Health tool offers a map of federally qualified health centers nationwide where anyone can go to get certain screenings, tests and other health care services, if they choose. The centers, located in underserved areas, provide services regardless of patients’ ability to pay, and charge for services on a sliding fee scale.

When it comes to seasonal illnesses, the Preventive Health tool also includes a way to find where flu shots are being offered, such as pharmacies, grocery stores and urgent care clinics.

Only time will tell whether Facebook users actually engage with the tool — especially since Facebook has recently faced privacy issues, including a hack last year that exposed information on nearly 50 million users of the social network.

Yet with the Preventive Health tool, Facebook ensures that it will not have access to users’ test results or any other health information. Rather, the tool only provides information on recommendations and where to access care, based on a user’s age and sex.

“Any tests that you have done as a result of engaging with this information are completely outside of us. We don’t engage in that or hear about it ever from the health care system,” Abnousi said. “Secondly, your use of the Preventive Health tool on Facebook is not visible to any other Facebook users.”

He added that personal information about any activity in the Preventive Health tool is not shared with third parties, such as health organizations or insurance companies.

For some cancer types — such as cervical, colorectal, lung and breast — clinical trials have shown that screening to detect cancer early can reduce the risk of dying from that cancer.

“We all know that screening rates for cancer are not as high as they could be,” Wender said.

“There’s many, many people who’ve had a cancer death prevented because they’ve been screened — but there’s so many more who have lost their lives when a screening test might have helped, and so we need new ways to reach the public,” he said.

In June, Facebook debuted a blood donation feature in the United States to help users find places to donate blood in their area and be notified when a nearby blood donation may be in need.

In the future, there is a possibility that the Preventive Health tool could expand to other countries and include more resources on preventive care outside of cardiovascular health, cancer and seasonal illness — but for now, Abnousi said they want to make sure that the tool as-is reaches an audience.

“We’re going to spend the next six to 12 months really trying to understand whether people are engaging with this tool and whether it’s helpful or not,” he said. “Once we figure that out is when we’re going to start thinking about expansion.”