States reported declines in Medicaid enrollment and modest growth in total Medicaid spending for state fiscal year (FY) 2019 and budgeted for nearly flat enrollment growth but a return to more typical rates of spending growth for FY 2020. These Medicaid changes fall against the backdrop of robust state economies marked by strong revenue growth and low unemployment. This brief analyzes Medicaid enrollment and spending trends for FY 2019 and FY 2020 based on interviews and data provided by state Medicaid directors as part of the 19th annual survey of Medicaid directors in all 50 states and the District of Columbia. The methodology used to calculate enrollment and spending growth as well as additional information about Medicaid financing can be found at the end of the brief. Key findings are described below and in a companion report.

Enrollment: States largely attributed enrollment declines in FY 2019 (-1.7%) and relatively flat enrollment growth in FY 2020 (0.8%) to a stronger economy (Figure 1). A number of states, however, also pointed to changes in renewal processes, new functionality of upgraded eligibility systems, and enhanced verifications and data matching efforts as contributing to enrollment declines. 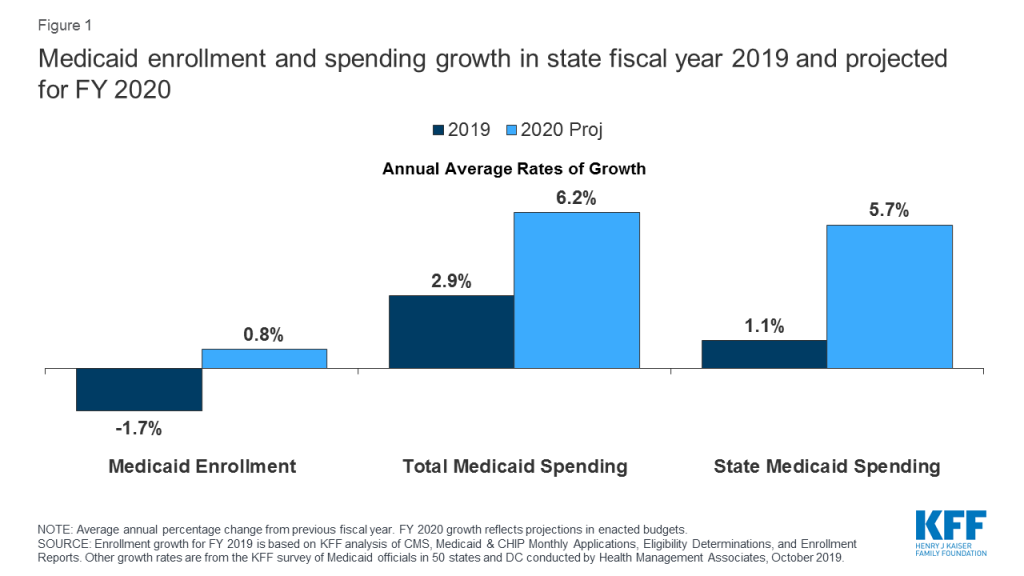 Total Spending: Total spending growth slowed to 2.9% in FY 2019 primarily due to enrollment declines. For FY 2020, however, states adopted budgets with projected growth returning to more typical levels of 6.2% as higher costs for prescription drugs, provider rate increases, and costs for the elderly and people with disabilities (including increased utilization of long-term services and supports) are expected to put upward pressure on total Medicaid spending.

State Spending: Despite an increase in the state share of financing for the Affordable Care Act’s (ACA’s) Medicaid expansion (from 6% in 2018 to 7% in 2019 and 10% in FY 2020 – midway through the state fiscal year), growth in the state share of Medicaid costs was lower than total spending growth in FY 2019 and budgeted to be similarly lower in FY 2020. Most expansion states reported relying on general fund support to finance the ACA Medicaid expansion, but a number of states also reported relying on provider taxes or other savings from the expansion.

Looking ahead: Looking ahead beyond FY 2020, economic conditions and the outcomes of federal and state elections in November 2020 are likely to have major implications for Medicaid, state budgets, and enrollees as debate about Medicaid expansion, demonstration waivers, the ACA, and broader health reform continue to be a major focus for candidates and voters.