Since 2006, Medicare beneficiaries have had access to prescription drug coverage through Part D, where private plan sponsors contract with Medicare to provide the drug benefit. In recent years, policymakers have expressed concerns about the absence of a hard cap on out-of-pocket spending for Part D enrollees, the significant increase in Medicare spending for enrollees with high drug costs, and the relatively weak financial incentives faced by Part D plan sponsors to control high drug costs. Recent proposals aim to address these concerns, including the Trump Administration’s Fiscal Year 2020 budget, the bipartisan prescription drug bill passed by the Senate Finance Committee, and H.R.3, the prescription drug bill recently announced by Speaker Pelosi (D-CA). This brief describes how the Medicare Part D benefit will change in 2020 under current law and proposed changes that would affect what beneficiaries, plans, manufacturers, and Medicare pay for drug costs under Part D in the future.

How Are Total Drug Costs Under Part D Divided Up?

The Medicare Part D standard benefit has different phases where enrollees, Part D plan sponsors, drug manufacturers, and Medicare pay varying shares of total drug costs. These phases include a deductible, an initial coverage phase, a coverage gap phase (once known as the “doughnut hole”), and catastrophic coverage (Figure 1). The allocation of costs in each benefit phase was spelled out in the Medicare Modernization Act of 2003 (the law establishing the Part D program), and has been modified through subsequent legislation. 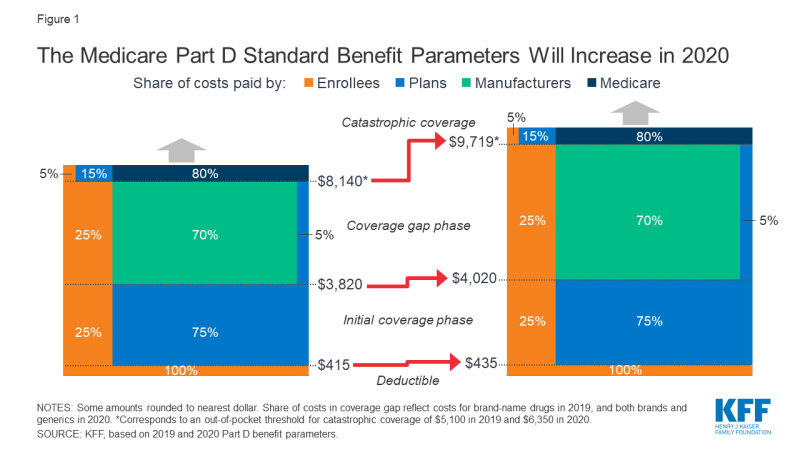 Originally, non-LIS Part D enrollees were responsible for paying 100% of their total drug costs in the coverage gap phase. The Affordable Care Act (ACA) included provisions to phase out the coverage gap by 2020 by gradually reducing the share of total drug costs paid by non-LIS enrollees to 25%, requiring drug manufacturers to provide a 50% discount on the price of brand-name drugs, and increasing the share of total drug costs paid by plans to 25% for brands and 75% for generics. The Bipartisan Budget Act of 2018 (BBA) made additional changes to expedite the closing of the coverage gap, beginning in 2019, by reducing beneficiary coinsurance for brands from 30% to 25% in 2019, increasing the manufacturer discount from 50% to 70%, and reducing plans’ share of costs for brand from 25% to 5%.

What’s Changing in Part D for 2020 Under Current Law?

In 2020, Medicare Part D enrollees are facing a relatively large increase in out-of-pocket drug costs before they qualify for catastrophic coverage (Figure 2). This is due to the expiration of the ACA provision that constrained the growth in out-of-pocket costs for Part D enrollees by slowing the growth rate in the catastrophic threshold between 2014 and 2019; in 2020 and beyond, the threshold will revert to the level that it would have been using the pre-ACA growth rate calculation. For 2020, the out-of-pocket spending threshold will increase by $1,250, from $5,100 to $6,350. 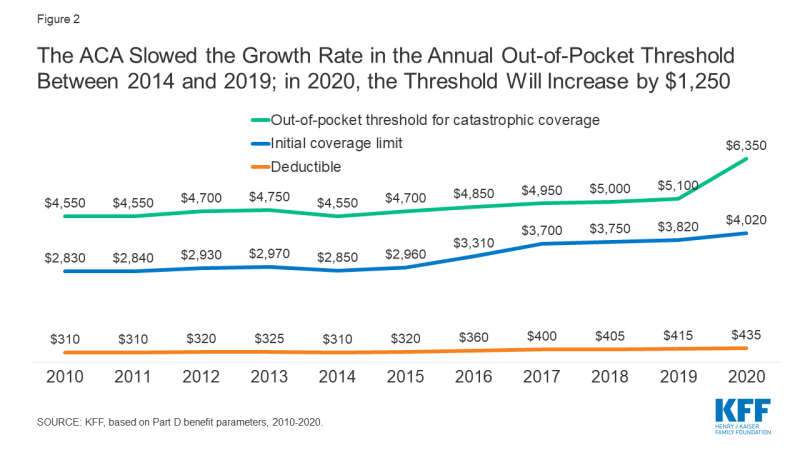 Part D enrollees will also face higher out-of-pocket costs in 2020 for the deductible and in the initial coverage phase, as they have in prior years. The standard deductible is increasing from $415 in 2019 to $435 in 2020, while the initial coverage limit is increasing from $3,820 in 2019 to $4,020 in 2020. For costs in the coverage gap phase, beneficiaries will pay 25% for both brand-name and generic drugs, with plans paying the remaining 75% of generic drug costs—which means that, effective in 2020, the Part D coverage gap will be fully phased out.

For non-LIS Part D enrollees who take only brand-name drugs and whose annual total drug costs reach the catastrophic coverage limit, these changes in the Part D benefit amounts will increase their annual out-of-pocket costs. Costs for Part D plan sponsors and drug manufacturers will also increase in dollar terms—but in terms of the share of total drug costs up to the catastrophic threshold, Part D plan sponsors will pay a smaller share in 2020 than in 2019, while manufacturers will pay a larger share (Figure 3). 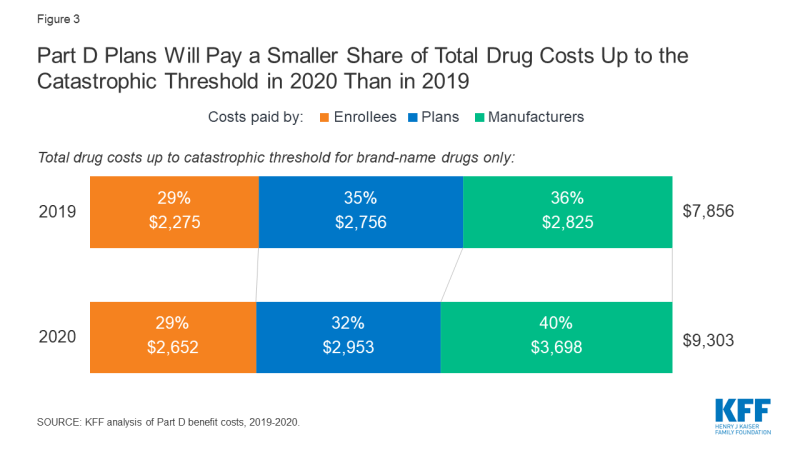 Figure 3: Part D Plans Will Pay a Smaller Share of Total Drug Costs Up to the Catastrophic Threshold in 2020 Than in 2019

Under current law, Part D plan liability for drug costs are expected to rise (in dollars) during the coverage gap phase, but their liability for catastrophic coverage could potentially decline. The increase in plan liability during the coverage gap phase is due to the increase in the out-of-pocket spending threshold, which means plans will pay 5% of total drug costs in that phase over a much longer span in 2020 than in 2019. This change, alone would increase premiums to the extent that it increases plan liability. However, the majority of Part D enrollees do not have drug costs high enough to reach the coverage gap phase, and because fewer enrollees are expected to qualify for catastrophic coverage in 2020 (where plans pay 15% of total drug costs), total plan costs could go down, on net, which would result in lower premiums.

How Many Part D Enrollees Could Be Affected By These Changes?

While there are no precise estimates of the number of Part D enrollees who will be affected by the increase in the out-of-pocket threshold for 2020, the increase will directly affect Part D enrollees with very high out-of-pocket drug costs. In 2017 (the most current year of Part D claims data available), 4.9 million non-LIS enrollees reached the coverage gap phase; of that total, 1 million non-LIS enrollees had out-of-pocket drug costs that exceeded the catastrophic threshold (Figure 4). Had the threshold been higher in 2017, fewer than 1 million enrollees would have qualified for catastrophic coverage that year. This means that a larger number of enrollees would have remained in the coverage gap in 2017, where they pay a larger share of their total costs than in the catastrophic phase. 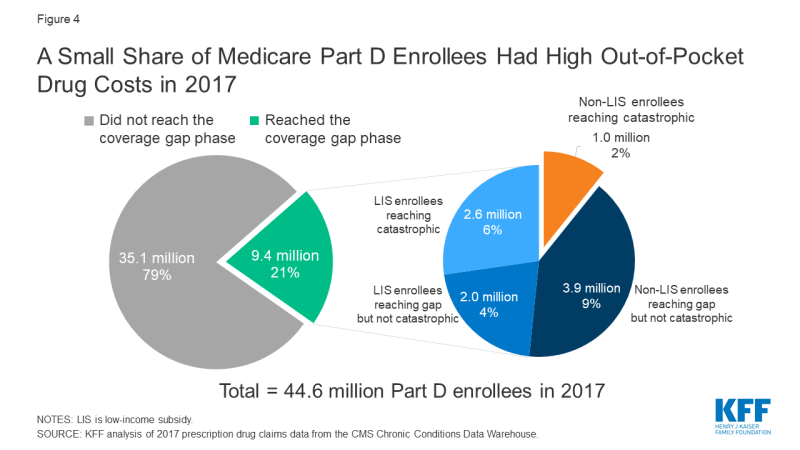 Lawmakers have introduced several proposals to address concerns about the lack of a hard cap on out-of-pocket spending for Part D enrollees and the significant increase in Medicare spending for catastrophic coverage in recent years, by adding a cap on out-of-pocket drug costs and shifting more of the responsibility for catastrophic coverage costs to Part D plans and drug manufacturers (Figure 5). 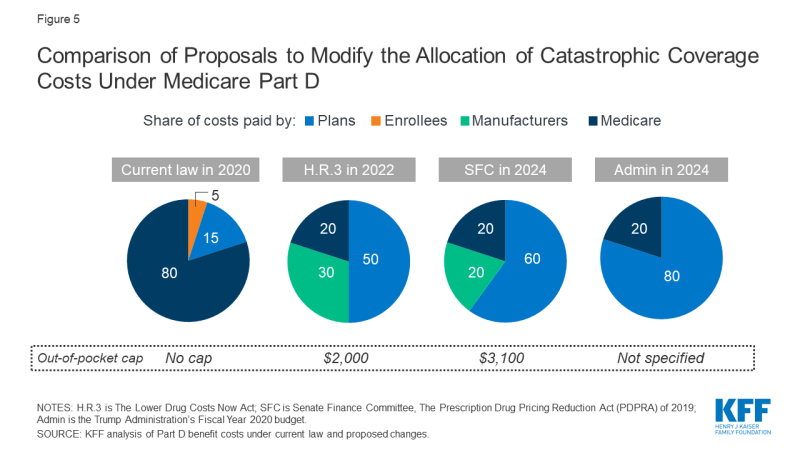 Figure 5: Comparison of Proposals to Modify the Allocation of Catastrophic Coverage Costs Under Medicare Part D

In its FY 2020 budget, the Trump Administration proposed establishing an out-of-pocket spending limit in Part D by phasing down beneficiary coinsurance in the catastrophic phase from 5% to 0% over four years, beginning in 2020. The Administration also proposed to increase Part D plans’ share of catastrophic coverage costs from 15% to 80%, and decrease Medicare’s share from 80% to 20%.

In July 2019, the Senate Finance Committee approved legislation that includes a proposal to establish a cap on out-of-pocket drug spending under Part D and reallocate liability for costs above the catastrophic threshold, as part of a larger package of drug price proposals. The cap on beneficiary out-of-pocket spending would be set at $3,100 in 2022. For costs above the catastrophic threshold, the proposal reduces Medicare payments from 80% to 20%, increases plans’ share from 15% to 60%, and requires drug manufacturers to pay 20%, instead of providing discounts in the coverage gap, which would be phased out. The proposed changes to the Medicare benefit design would be phased in over a three-year period, from 2022 to 2024.

In September 2019, Speaker Nancy Pelosi (D-CA) announced legislation that includes a proposal to restructure the Part D benefit, among other provisions. This proposal would establish a hard cap on out-of-pocket spending that would initially be set at $2,000. For costs above the catastrophic threshold, the proposal reduces Medicare payments from 80% to 20%, increases plans’ share from 15% to 50%, and requires drug manufacturers to pay 30%. In addition, the House proposal would also phase out the coverage gap and modify the allocation of costs in the initial coverage phase, by requiring manufacturers to pay 10% of costs. The proposed changes would take effect in 2022.