These data are from Gallup’s annual Work and Education poll, conducted Aug. 1-14.

The pharmaceutical industry has unseated the federal government as the lowest-rated industry this year, in terms of its net-positive score; the government has been last or tied for last from 2011 through 2018. The healthcare industry’s negative ratings also exceed its positive ratings by double digits, while the advertising and public relations industry’s net rating is barely negative.

Americans continue to give their highest ratings to the restaurant and computer industries, while the grocery industry and agriculture and farming also rank near the top of the list, with net-positive ratings that are better than +40.

Other industries that rank among the top half of the list include travel, accounting, automobile, retail, real estate, banking, electric and gas utilities, and sports.

As to the rest of the list, the industries of airlines, telephone, publishing, internet, movie and education each receive net-positive scores in the double digits. Meanwhile, the television and radio industry, the legal field, and the oil and gas industry barely register net-positive scores.

A New Low for the Pharmaceutical Industry’s Image 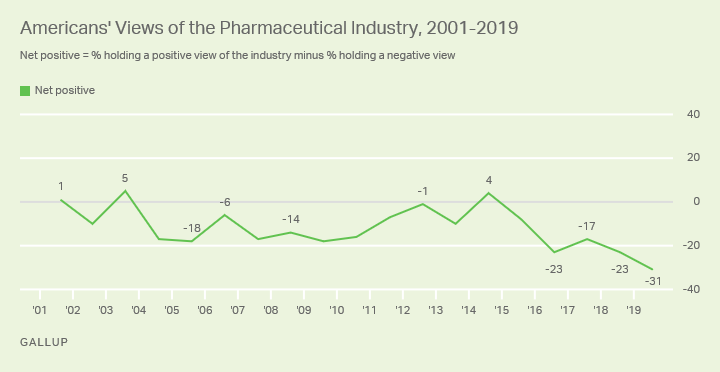 The new low in the pharmaceutical industry’s U.S. image comes amid a range of criticisms of industry norms, from generating the highest drug costs in the world to spending massive amounts in lobbying politicians to the industry’s role in the U.S. opioid crisis. Several Democratic candidates have called out the industry in their party’s presidential debates.

Just after Gallup conducted this poll, an Oklahoma judge ordered Johnson & Johnson to pay $572 million for its role in the state’s opioid epidemic. Meanwhile, legislators on Capitol Hill are working to rein in the industry’s drug prices.

Most industries’ images improved as the U.S. recovered from the global economic crisis of 2008 — and this was the case for electric and gas utilities as well as the oil and gas industry. The industries’ images also likely have strongly benefited from gas prices that dropped precipitously in 2014 and have mostly remained below $3 per gallon since, according to national averages from the U.S. Department of Energy. 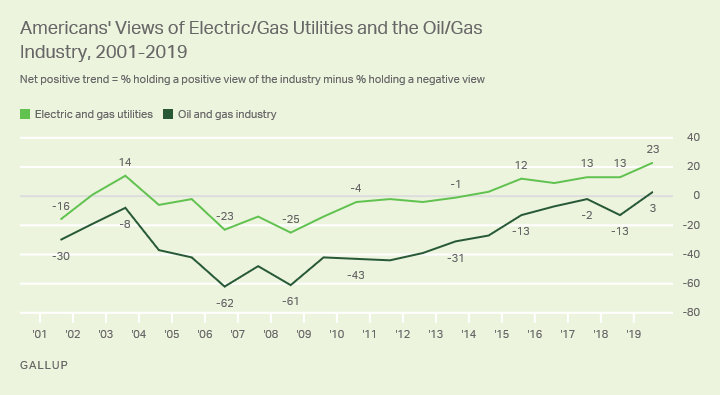 The pharmaceutical industry’s U.S. image has fallen to a new low. The industry can hope to recover in the same way other industries have after particularly negative ratings, including the oil and gas, real estate, and automobile industries. Real estate’s image, for example, managed to recover from being near the bottom of the list, with a net rating of -40 in 2008, to its current spot among the top 10-rated industries with a +30 net rating.

As the opioid epidemic rages on — and as the actors involved in creating it continue to experience lawsuits, protests and public shaming — it may be hard for the pharmaceutical industry to make a comeback just yet. The industry’s rating likely will not recover until its role in the opioid epidemic is addressed, and the political pressure on the industry for high prices and massive profits subsides.

Americans’ views of all industries are susceptible to larger economic forces, however. So, even industries that are regarded most highly could be in for a downturn in their public images if red flags continue to suggest a coming recession.