FILE - In this Sunday, Sept 9, 2018 file photo, a health worker sprays disinfectant on his colleague after working at an Ebola treatment centre in Beni, Eastern Congo. The World Health Organization is announcing on Wednesday, Oct. 17 whether Congo's latest outbreak of the deadly Ebola virus should be declared a global health emergency. (AP Photo/Al-hadji Kudra Maliro, file)

“The risk of Ebola spread in DRC and the region remains very high, and the risk of spread outside the region remains low,” Dr. Tedros Adhanom Ghebreyesus, director-general of WHO, said during a press conference on Wednesday.
“Now is the time for the international community to stand in solidarity with the people of DRC.”
WHO defines a public health emergency of international concern as “an extraordinary event” that constitutes a “public health risk to other States through the international spread of disease” and “to potentially require a coordinated international response.”
The WHO International Health Regulations’ Emergency Committee for Ebola Viral Disease in Congo convened at the organization’s world headquarters in Geneva on Wednesday to discuss whether or not the outbreak constitutes international concern.
“The fight is ongoing for a full year now,” Robert Steffen, chairman of the committee, said during a press conference on Wednesday. 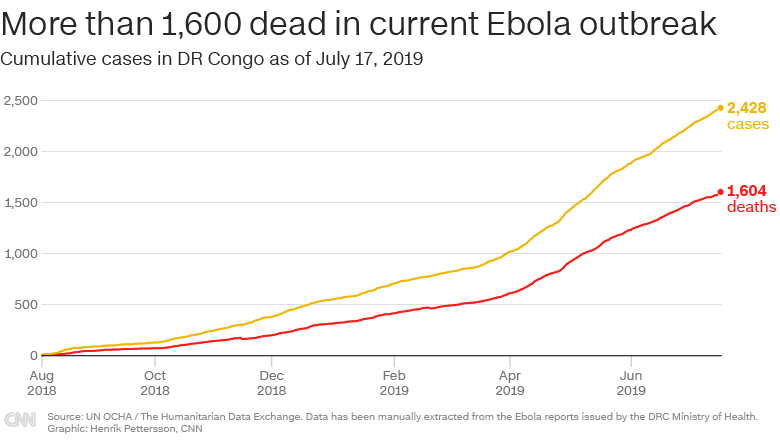 The meeting was the fourth time the committee has convened to review the outbreak. In a deliberation on Friday, it was decided that the outbreak does not constitute a public health emergency of international concern.
“This emergency in Congo has been going on for almost a year and is a very, very serious emergency and has been treated as our highest level of emergency since the beginning — but the difference that’s going on with this committee is, do we need to tell the rest of the world to start taking measures? And if so, what measures are we going to tell them to do?” Dr. Margaret Harris, WHO’s communication lead on the Ebola emergency in DRC, said in a video posted to Twitter ahead of the meeting on Wednesday
“They make their decision as a consensus,” she said. “They will also lay down what under that public health emergency of international concern other countries need to do. So they will have recommendations for the affected country — that’s Congo. They will have recommendations for the neighboring countries, those most at risk. They will also have recommendations for the rest of the world.”
The committee’s consensus and recommendations then get presented to the WHO Director-General, who chooses whether or not to agree and adopt the committee’s decisions.
Global health emergencies are generally only announced in what the WHO calls “extraordinary” circumstances, with this being just the fifth declaration of its kind.
With its latest declaration, WHO does not recommend any restrictions on travel or trade, but rather the organization released recommendations for affected countries, which include to continue strengthening community awareness and screenings, among other actions.
WHO’s decision to declare a public health emergency of international concern won’t markedly shift the DRC’s strategy to combat the deadly outbreak, said the country’s Health Minister Oly Ilunga Kalenga.
“There is only one strategy to fight Ebola,” Kalenga said during a press conference in the city of Goma on Thursday. “It is a series of actions around every case. We need to identify contacts, vaccinate the contacts, and disinfect and respect the general hygiene rules. These measures allow the epidemic to be contained. What changes is the context.”

Committee members were disappointed by delays in funding that have constrained the response, according to WHO, despite the outbreak stretching for nearly a year and the confirmed cases of Ebola steadily expanding.
WHO officials on the ground have been disappointed with the amount of funding pledges coming in — way short of the needs for their response — for several months.
While serious, this outbreak has yet to have the level of global attention that the West African outbreak garnered where more than 11,000 people died. There also hasn’t been any significant spread outside of the DRC — something health officials say has led to a form of donor complacency.
That complacency was also compounded by the belief that an experimental vaccine would help stop this outbreak in its tracks in the early weeks of the response, according to several responders from both the UN and NGOs whom CNN spoke to on the ground in June.
Some donor fatigue also set in because of the perception that their money wasn’t being spent in the most efficient way possible, according to extensive CNN reporting last month.
The WHO is formulating its fourth strategic plan to try and stamp out the outbreak — saying it will cost hundreds of millions of dollars.
That is why, in part, many public health experts expressly called for the emergency designation months ago — as a way to refocus attention and to bring in much-needed funds.
Still, following Wednesday’s announcement, Ghebreyesus wrote in a post on Twitter that “a public health emergency of international concern is not for fundraising, it’s for preventing the spread of disease.” The World Health Organization “is not aware of any donor that has withheld funding because the emergency had not been declared. But if that was the excuse, it can no longer be used.”
The humanitarian group Mercy Corps hopes that WHO’s declaration “will translate into urgent and practical action, including more funding from international donors,” Laura Miller, Mercy Corps’ acting country director for DRC, said in a written statement following WHO’s announcement.
“Every day, women, men and children are dying of the Ebola virus and it is becoming too easy to forget that the ever-climbing case numbers are people,” she said in part. “With the WHO declaration comes the possibility that neighboring countries could react by heavily blocking or reducing border access in a way that restricts trade. This would be devastating for the economy of the region and impact the food security of large numbers of people.” 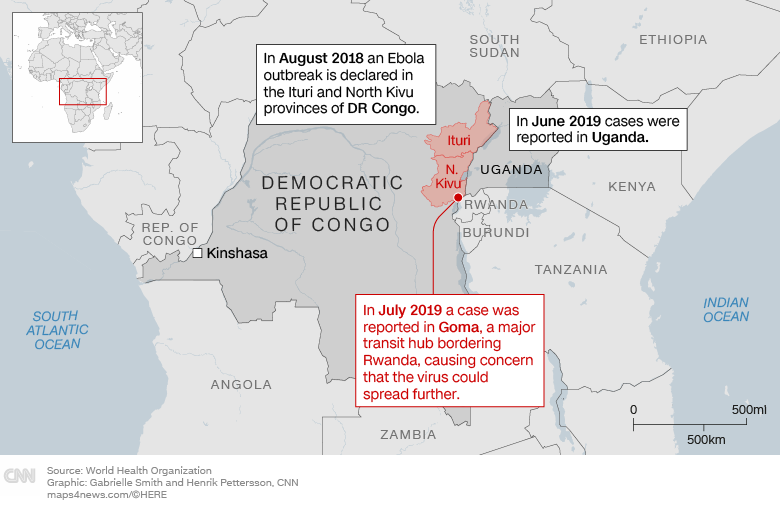 This Ebola outbreak began last summer. On the first day of August in 2018, the Ministry of Health of the Democratic Republic of Congo declared an outbreak of Ebola virus disease in the country’s North Kivu province.
Now the World Health Organization reports a total of 2,512 Ebola cases and 1,676 deaths involved in the outbreak, as of Monday.
On Monday, the United Nations hosted a high-level meeting to discuss response efforts amid the current outbreak in Congo. The meeting was held after the first case of Ebola was confirmed on Sunday in the city of Goma, the capital of North Kivu province and a major transit hub where some 1 million people reside on the Rwandan border.
That case raised fears that the virus could make its way across the porous border into still-uninfected Rwanda — something health experts have been working desperately to prevent. Health officials and aid organizations have dreaded Ebola’s arrival in Goma for months, and have been working to prepare for the eventuality — which is partly why the case was immediately caught and isolated.
These preparation measures include an emergency response team that has carried out outbreak simulation exercises, WHO teams that screen travelers at every entry and exit point in Goma, and workers who check the city’s health centers every morning for suspected cases, according to WHO officials.
DRC Health Minister Kalenga said on Thursday that the recent confirmed Ebola case of a person traveling to Goma was a pastor, as were other recent cases. So, he said, the practice of placing hands on people during religious ceremonies was a driver of the disease spread. He called on pastors to be responsible and stop this practice.
It has been difficult to get ahead of the outbreak as ongoing violence in the area has impacted response efforts. Since January, there have been 198 attacks against health care personnel and patients in Ebola-affected areas, resulting in seven deaths and 58 injuries, according to WHO.
The Congolese Ministry of Health released a statement on its official Twitter account on Wednesday accepting the World Health Organization designation that the ongoing Ebola outbreak in the Democratic Republic of Congo now “constitutes a public health emergency of international concern.”
The statement cited that the number one difficulty in containing the outbreak is a result of “development issues” in the region and the “weak health system.”
The ministry added that “the government is looking into measures” to prevent people considered high risk “from spreading the epidemic in the region.”
The rare but deadly Ebola virus disease can cause fever, headache, muscle pain, vomiting, diarrhea and unexplained bleeding, among other symptoms. The virus was first identified in 1976 when outbreaks occurred near the Ebola River in the DRC. 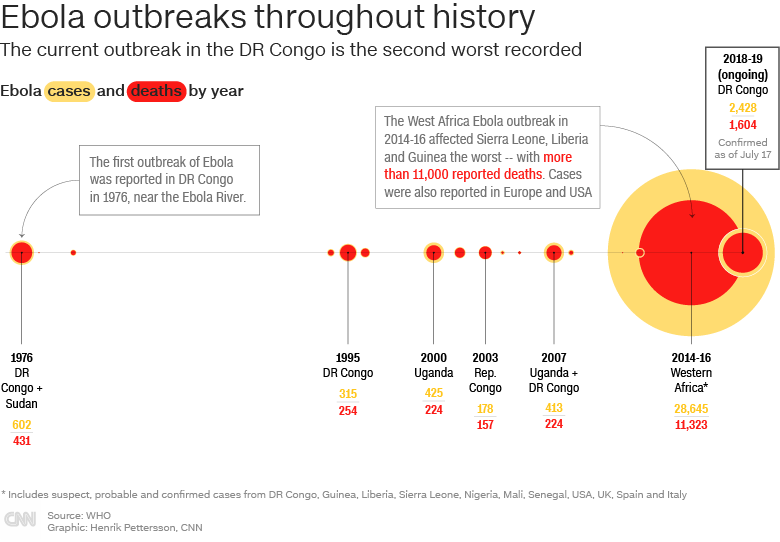 Scientists think the virus initially infected humans through close contact with an infected animal, such as a bat, and then the virus spread from person to person.
The virus spreads between humans through direct contact with an infected person’s bodily fluids, including infected blood, feces or vomit, or direct contact with contaminated objects, such as needles and syringes.
Yet hope comes in the form of research advancements. Experimental treatments and vaccines have been used in Congo. To date, at least 585 patients have recovered from the illness, and more than 133,000 vaccines have been administered, which many believe has helped limit the spread of the outbreak.
The rVSV-ZEBOV experimental vaccine, manufactured by Merck, was approved by Congo’s health ministry ethics committee for use in country in May 2018.