Oklahoma is one of 14 states that has not expanded Medicaid under the Affordable Care Act. A group called Oklahomans Decide Healthcare hopes to change that by gathering enough signatures to put a constitutional amendment on the ballot in 2020.

The summary, or “gist,” of the signature-gathering petition reads:

This measure adds a new Article to the Oklahoma Constitution. The new Article would expand Oklahoma’s Medicaid program to include certain low-income adults between the ages of 18 and 65 whose income does not exceed 133 percent of the federal poverty level, as permitted under the federal Medicaid laws.

The Oklahoma Council of Public Affairs, a conservative think tank, mounted a challenge in front of the state Supreme Court, calling the petition language “inaccurate” because a federal formula called an “income discregard” essentially stretches eligibility to 138 percent of the federal poverty level.

“That formula can and has already changed. It’s changed twice since the advent for the Affordable Care Act,” explained attorney Melanie Rughani, who represented the initiative-filers. “138 [percent] would be, frankly, inaccurate because the five percent income disregard could change tomorrow.”

OCPA also told the court that adding expanding Medicaid through the state constitution, rather than through statute, would strip the legislature of its spending power, making it unconstitutional.

Medicaid expansion would provide an estimated $900 million a year in federal money and cost the state over $100 million.

In a brief ruling, Chief Justice Noma D. Gurich said, “We believe the language of the gist is clear.” The ruling denied OCPA’s constitutionality arguments without explanation. 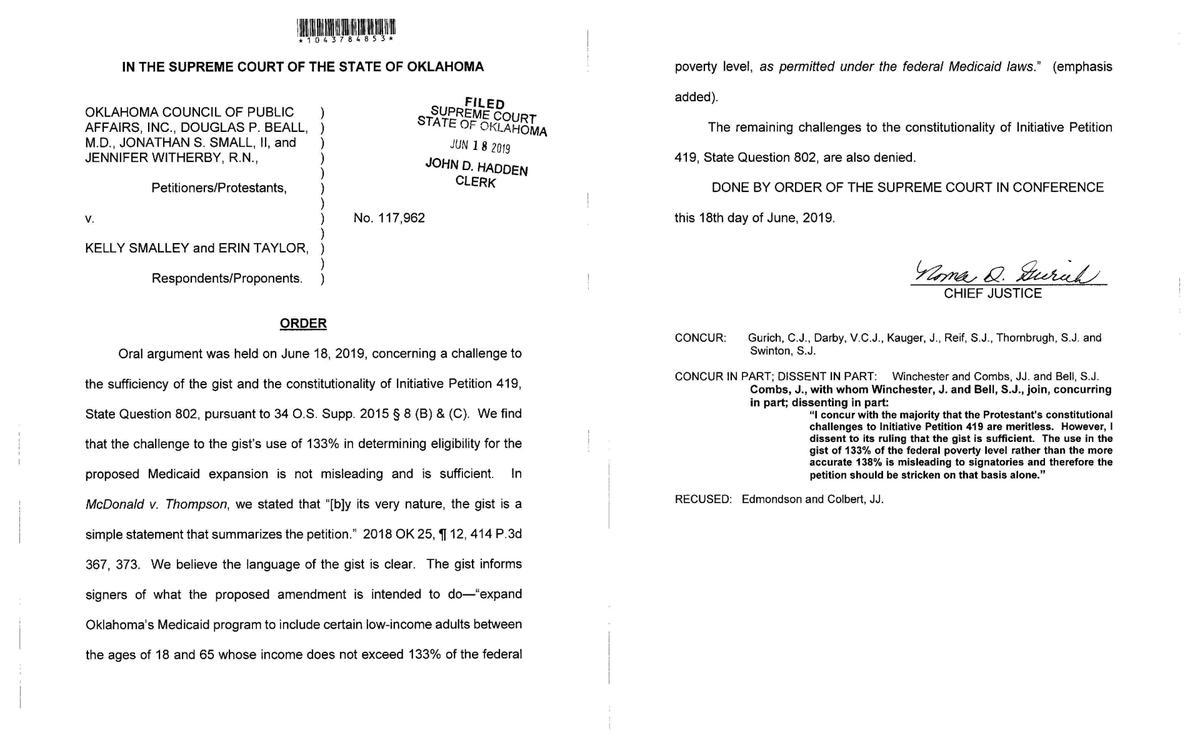 The Oklahoma Supreme Court ruled on a legal challenge to the initiative petition to expand Medicaid in the state on June 18, 2019.

The petition to expand Medicaid needs nearly 178,000 signatures to get on the 2020 ballot. Amber England, the campaign manager for Oklahomans Decide Healthcare, says the group plans to start collecting in August.