The Affordable Care Act (ACA) continues to earn a split decision from Americans, with 50% approving and 48% disapproving of the healthcare law in an April 1-9 Gallup poll. This is similar to the previous measure, from November 2018, when 48% approved and 47% disapproved.

More broadly, in each of the past five measurements, starting with a record-high 55% approval in April 2017, those approving of the law have outnumbered those disapproving by at least one percentage point, a shift from all but one Gallup measure before that. 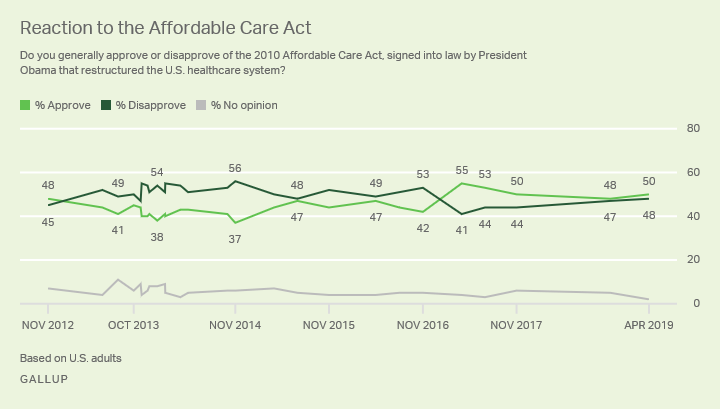 That lone pre-2017 Gallup survey in which opposition to ACA did not exceed support was the first one that asked the question, from November 2012. The all-time low approval of the law in Gallup’s trend is 37%, recorded in November 2014 after strong Republican showings in the midterm elections.

The relative stability in ACA approval since 2017 stems from rigid political polarization, with more than eight in 10 Democrats consistently approving, versus roughly one in 10 Republicans. Most of the longer-term shifts in approval reflect variation among independents. Independents’ approval has ranged from a low of 33% in November 2014 to a high of 56% in April 2017, amid Republicans’ ultimately failed efforts to repeal the law. 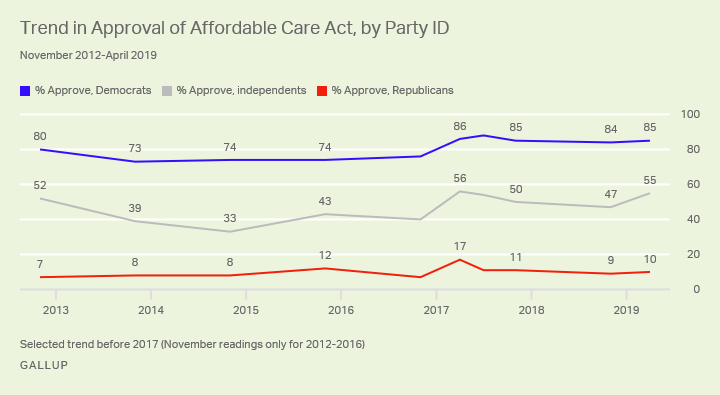