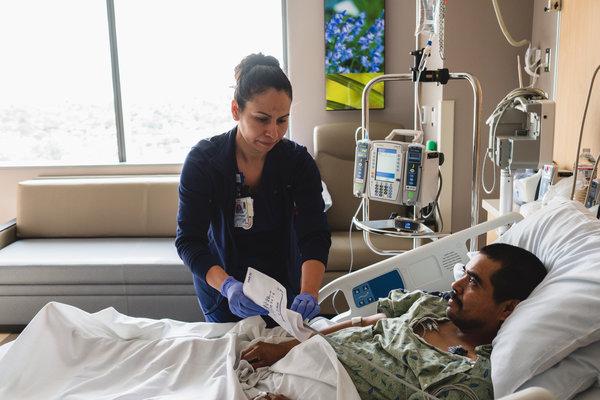 Lourdes Sorreles, a registered nurse, with Pablo Lopaz Romero in the progressive care unit of the Banner University Medical Center Phoenix. While many jobs are being automated, there are still holdouts in the economy, especially in the health fields.

A small group of well-educated professionals enjoys rising wages, while most workers toil in low-wage jobs with few chances to advance.

There’s Intel’s $7 billion, seven-nanometer chip plant going up in Chandler. In Scottsdale, Axon, the maker of the Taser, is hungrily snatching talent from Silicon Valley as it embraces automation to keep up with growing demand. Start-ups in fields as varied as autonomous drones and blockchain are flocking to the area, drawn in large part by light regulation and tax incentives. Arizona State University is furiously churning out engineers.

And yet for all its success in drawing and nurturing firms on the technological frontier, Phoenix cannot escape the uncomfortable pattern taking shape across the American economy: Despite all its shiny new high-tech businesses, the vast majority of new jobs are in workaday service industries, like health care, hospitality, retail and building services, where pay is mediocre.

The forecast of an America where robots do all the work while humans live off some yet-to-be-invented welfare program may be a Silicon Valley pipe dream. But automation is changing the nature of work, flushing workers without a college degree out of productive industries, like manufacturing and high-tech services, and into tasks with meager wages and no prospect for advancement.

Automation is splitting the American labor force into two worlds. There is a small island of highly educated professionals making good wages at corporations like Intel or Boeing, which reap hundreds of thousands of dollars in profit per employee. That island sits in the middle of a sea of less educated workers who are stuck at businesses like hotels, restaurants and nursing homes that generate much smaller profits per employee and stay viable primarily by keeping wages low.

Even economists are reassessing their belief that technological progress lifts all boats, and are beginning to worry about the new configuration of work.

Recent research has concluded that robots are reducing the demand for workers and weighing down wages, which have been rising more slowly than the productivity of workers. Some economists have concluded that the use of robots explains the decline in the share of national income going into workers’ paychecks over the last three decades.

Because it pushes workers to the less productive parts of the economy, automation also helps explain one of the economy’s thorniest paradoxes: Despite the spread of information technology, robots and artificial intelligence breakthroughs, overall productivity growth remains sluggish.

“The view that we should not worry about any of these things and follow technology to wherever it will go is insane,” said Daron Acemoglu, an economist at the Massachusetts Institute of Technology.

Semiconductor companies like Intel or NXP are among the most successful in the Phoenix area. From 2010 to 2017, the productivity of workers in such firms — a measure of the dollar value of their production — grew by about 2.1 percent per year, according to an analysis by Mark Muro and Jacob Whiton of the Brookings Institution. Pay is great: $2,790 a week, on average, according to government statistics.

But the industry doesn’t generate that many jobs. In 2017, the semiconductor and related devices industry employed 16,600 people in the Phoenix area, about 10,000 fewer than three decades ago.

“We automate the pieces that can be automated,” said Paul Hart, a senior vice president running the radio-frequency power business at NXP’s plant in Chandler. “The work force grows but we need A.I. and automation to increase the throughput.”

Axon, which makes the Taser as well as body cameras used by police forces, is also automating whatever it can. Today, robots make four times as many Taser cartridges as 80 workers once did less than 10 years ago, said Bill Denzer, Axon’s vice president for manufacturing. Workers’ jobs were saved because the company brought other manufacturing work back from Mexico.

To find the bulk of jobs in Phoenix, you have to look on the other side of the economy: where productivity is low. Building services, like janitors and gardeners, employed nearly 35,000 people in the area in 2017, and health care and social services accounted for 254,000 workers. Restaurants and other eateries employed 136,000 workers, 24,000 more than at the trough of the recession in 2010. They made less than $450 a week.

The biggest single employer in town is Banner Health, which has about 50,000 workers throughout a vast network that includes hospitals, outpatient clinics and home health aides. Though it employs high-paid doctors, it relies on an army of lower paid orderlies and technicians. A nursing assistant in Phoenix makes $31,000 a year, on average. A home health aide makes $24,000. While Banner invests heavily in technology, the machines do not generally reduce demand for workers. “There are not huge opportunities to increase productivity, but technology has a significant impact on quality,” said Banner’s chief operating officer, Becky Kuhn.

The same is true across the national economy. Jobs grow in health care, social assistance, accommodation, food services, building administration and waste services. Not only are some of the tasks tough to automate, employers have little financial incentive to replace low-wage workers with machines.

On the other end of the spectrum, the employment footprint of highly productive industries, like finance, manufacturing, information services and wholesale trade, has shrunk over the last 30 years.

Economists have a hard time getting their heads around this. Steeped in the belief that technology inevitably leads to better jobs and higher pay, they long resisted the notion that the Luddites of the 19th century, who famously thrashed the weaving machines that were taking their jobs, might have had a point.

“In the standard economic canon, the proposition that you can increase productivity and harm labor is bunkum,” Mr. Acemoglu said.

By reducing prices and improving quality, technology was expected to raise demand, which would require more jobs. What’s more, economists thought, more productive workers would have higher incomes. This would create demand for new, unheard-of things that somebody would have to make.

To prove their case, economists pointed confidently to one of the greatest technological leaps of the last few hundred years, when the rural economy gave way to the industrial era.

In 1900, agriculture employed 12 million Americans. By 2014, tractors, combines and other equipment had flushed 10 million people out of the sector. But as farm labor declined, the industrial economy added jobs even faster. What happened? As the new farm machines boosted food production and made produce cheaper, demand for agricultural products grew. And farmers used their higher incomes to purchase newfangled industrial goods.

The new industries were highly productive and also subject to furious technological advancement. Weavers lost their jobs to automated looms; secretaries lost their jobs to Microsoft Windows. But each new spin of the technological wheel, from plastic toys to televisions to computers, yielded higher incomes for workers and more sophisticated products and services for them to buy.

Something different is going on in our current technological revolution. In a new study, David Autor of the Massachusetts Institute of Technology and Anna Salomons of Utrecht University found that over the last 40 years, jobs have fallen in every single industry that introduced technologies to enhance productivity.

The only reason employment didn’t fall across the entire economy is that other industries, with less productivity growth, picked up the slack. “The challenge is not the quantity of jobs,” they wrote. “The challenge is the quality of jobs available to low- and medium-skill workers.”

Adair Turner, a senior fellow at the Institute for New Economic Thinking in London, argues that the economy today resembles what would have happened if farmers had spent their extra income from the use of tractors and combines on domestic servants. Productivity in domestic work doesn’t grow quickly. As more and more workers were bumped out of agriculture into servitude, productivity growth across the economy would have stagnated.

“Until a few years ago, I didn’t think this was a very complicated subject; The Luddites were wrong and the believers in technology and technological progress were right,” Lawrence Summers, a former Treasury secretary and presidential economic adviser, said in a lecture at the National Bureau of Economic Research five years ago. “I’m not so completely certain now.”

The growing awareness of robots’ impact on the working class raises anew a very old question: Could automation go too far? Mr. Acemoglu and Pascual Restrepo of Boston University argue that businesses are not even reaping large rewards for the money they are spending to replace their workers with machines.

But the cost of automation to workers and society could be substantial. “It may well be that,” Mr. Summers said, “some categories of labor will not be able to earn a subsistence income.” And this could exacerbate social ills, from workers dropping out of jobs and getting hooked on painkillers, to mass incarceration and families falling apart.

Silicon Valley’s dream of an economy without workers may be implausible. But an economy where most people toil exclusively in the lowliest of jobs might be little better.