Here’s a look at the annual run rates, hybrid cloud strategies, and approaches to artificial intelligence and machine learning among the public cloud providers.

Choosing the right public cloud provider is becoming an increasingly nuanced discussion that goes well beyond scale. We all know the large cloud players — AWS, Google Cloud Platform, IBM Cloud and Microsoft Azure — but stacking them up depends on your enterprise’s needs.

Here’s a crack at stacking up the cloud providers and how Oracle and Alibaba are edging into the game based on annual run rates.

Increasingly, companies will combine the large public cloud providers along with a specialist. In other words, Salesforce has partnerships with Amazon Web Services, Google Cloud Platform, and works with IBM, too. Workday and IBM are closely linked on many fronts.

Among the largest public cloud players, the disclosure and transparency into products, financials, and pricing is better than ever. With that reality in mind here’s a look at the large public cloud players based on public comments, earnings reports, and RightScale’s 2018 State of the Cloud report.

The fourth quarter provided a bit of a watershed moment for the major public cloud players: Google actually put a figure on its cloud revenue.

We believe that Google Cloud platform, based on publicly reported data for the 12 months ending December 2017, is the fastest growing major public cloud provider in the world. We’re also increasingly doing larger, more strategic deals with customers. In fact, a number of deals worth over $1 million across all cloud products more than tripled from 2016 to 2017.

With Google offering a bit of disclosure around its cloud business it became much easier to establish a pecking order in terms of sales. Microsoft on its latest quarter disclosed its commercial cloud revenue and an annual run rate north of $21 billion.

IBM’s as-a-service revenue, which includes software, platform and infrastructure, is more than $10 billion.

And Oracle, which a line-by-line account of its cloud progress, has hit scale and is betting that autonomous features and data-as-a-service are differentiators.

One cloud vendor that’s worth watching is Alibaba, which is a China-based AWS in many ways. Alibaba adds features at a rapid clip, is betting on artificial intelligence and operates a massive e-commerce business. Sound familiar?

When you look at the major public cloud providers, it’s clear that AWS and Microsoft Azure are the two top dogs. RightScale’s survey of 997 respondents across multiple industries and company sizes tells the tale. 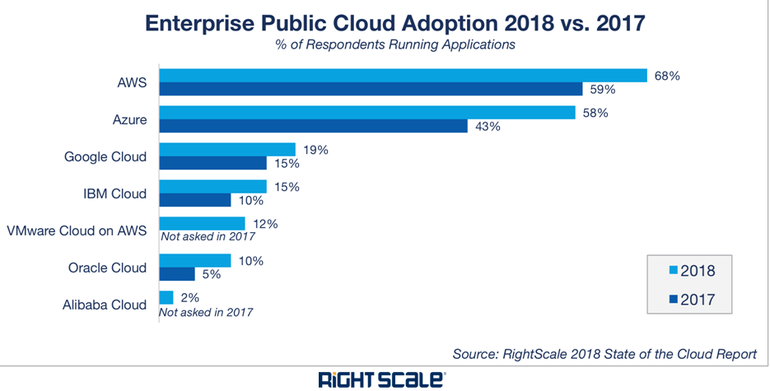 The problem with the Microsoft vs. AWS storyline is that the two cloud giants don’t exactly sync up well. Microsoft’s commercial cloud revenue includes Office 365, which dominates in sales. 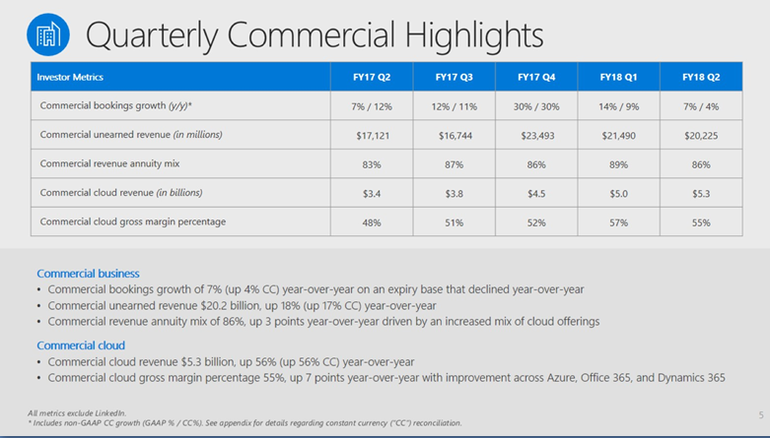 In other words, Microsoft’s commercial cloud business is more like Google Cloud Platform and G Suite than AWS.

What’s clear based on the RightScale survey is that the public cloud pie is growing for all the major players offering a stack.

The takeaway here is that these cloud providers are likely to share enterprise customers, which will look to optimize costs and often pit the vendors against each other.

While enterprises are looking to have multiple cloud players in their stack, they’re also likely to run their private clouds too. This hybrid cloud approach is likely to persist for the foreseeable future.

That reality is why VMware running on AWS is gaining so much traction. On the surface, VMware and AWS seem like an odd couple, but the partnership is paying off on multiple fronts.

First, check out the number of virtual machines in the cloud based on RightScale’s survey.

Here’s a look at the scorecard when the private-public cloud jousting is done. 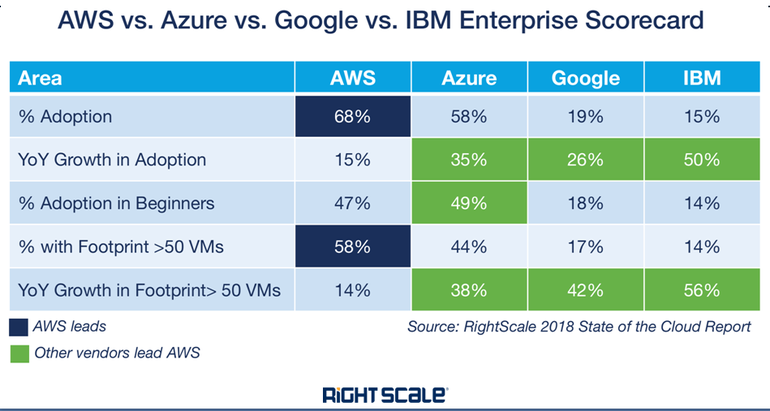 Turns out every public cloud large player has a hybrid story. And each narrative is a bit different.

Microsoft Azure can hook into all those Windows Server customers in the enterprise data center and stretch into its cloud.

For me, it all comes down to really having an architectural advantage on what is a new secular trend. So when we think about the intelligent cloud and the intelligent edge and then bring that to the Azure business, you can see it at each layer. When it comes to infrastructure, we’re the only cloud provider that provides true hybrid cloud computing with Azure and Azure Stack. When it comes to the data tier, we have real uniqueness.

Microsoft’s Azure bet is that a consistent stack across the public cloud, data center, Internet of Things and edge and data will win in the enterprise with hybrid approaches.

Given that AWS is paired up with VMware and Microsoft has its own stack across the enterprise, Google Cloud Platform hooked up with Cisco with its hybrid data plan.

In October, Google and Cisco outlined a partnership that revolves around better connecting the networking giant’s infrastructure with Google’s services.

The Google-Cisco partnership shouldn’t be dismissed — especially since so much of it revolves around containers. Container adoption — specifically Kubernetes and Docker — surged in the RightScale survey and appears to be baked into future architecture plans.

On the cloud system and private cloud fronts, Microsoft and Oracle have integrated hardware and service systems as does Cisco and IBM.

Role of AI and machine learning

On nearly every earnings conference call from the cloud vendors, machine learning and artificial intelligence took top billing as a differentiator.

AWS has multiple AI and machine learning services and has Alexa as the most popular digital assistant as a front woman.

Google Cloud Platform is staking its future growth on machine learning too.

We want everyone to be able to use machine learning for their own needs. We recently gave Google Cloud customers access to Auto ML, which makes it far easier to build complex new enrollments. Since its launched a few weeks ago, over 10,000 customers have already signed up to try.

Indeed, AutoML is part of Google Cloud Platform’s broader strategy. That strategy revolves around using machine learning and artificial intelligence to get a foothold in an enterprise and then expand form there.

AWS is using the AI and machine learning approach differently. Why? AWS is already in your company for compute and cloud storage so its AI services are more of an upsell and wallet-share expansion.

Microsoft is using artificial intelligence and machine learning and combining with its Azure Internet of things services.

Meanwhile, IBM with its Watson platform is looking to become more of a cloud based data operating system.

Add it up and it’s a lot to digest for any enterprise technology buyer. Don’t sweat the concerns about the AI bake-off. Here’s why: Chances are strong that you will have multiple machine learning and AI vendors in your company. You’ll ultimately pick the cloud and machine learning models that work and that means a portfolio approach.

As the first half of 2018 concluded, the dominant three — AWS, Google and Microsoft Azure — only became more dominant. In fact, Gartner would up cutting the playing field for IaaS.

The other development is that the three parties bet big on the Internet of things, AI and expanded into augmented reality a bit more. The general theme is that machine learning and AI are a service and will be consumed via the cloud.

In a research report from Jefferies, analyst Brent Thill noted that AWS is the runaway No. 1 with Azure challenging and Google gaining share.

What remains to be seen is whether Google breaks out more metrics to back up the anecdotes pointing to more cloud customer wins. Here are two charts highlighting the revenue and market share trends from the big three cloud providers. 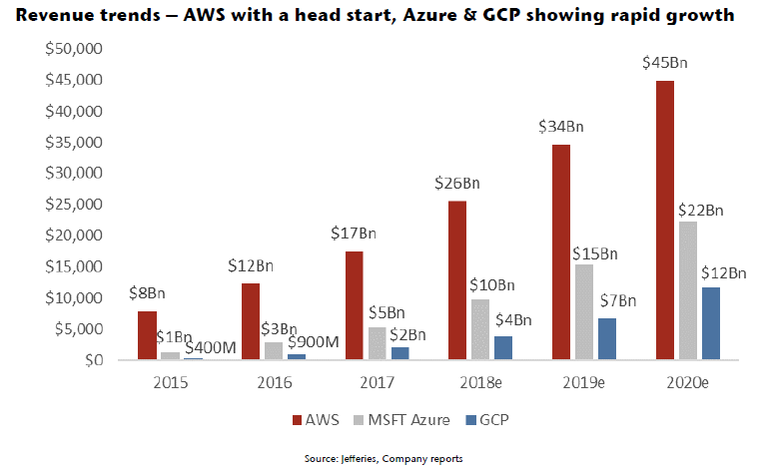 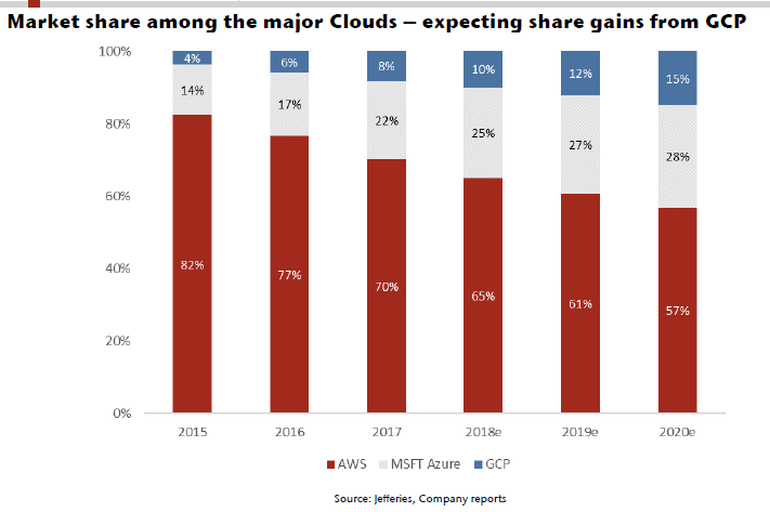 The fourth quarter of 2018 brought on multiple changes and big moves — ranging from executive changes to acquisitions to evolving partnerships focused on the hybrid cloud.

AWS’ partnership with VMware gained momentum and the cloud giant outlined its broader ambitions at re:Invent 2018. AWS is moving beyond infrastructure and more into a full-stack approach that even includes converged systems in partnership with VMware. AWS is also targeting AI as well as forecasting and analytics. The blitz from AWS was so extensive that ZDNet sister brand TechRepublic compiled an ebook on everything that happened at re:Invent: AWS re:Invent 2018: A guide for tech and business pros (free PDF)

And IBM developed a multicloud approach and bought Red Hat for $34 billion. The Red Hat purchase is interesting — notably because IBM is betting the company on the acquisition. It remains to be seen how the IBM and Red Hat cultures come together. On the bright side, the two companies have been partners for years.

In the meantime, IBM is building out its cloud for AI workloads and industry specific use cases.

All the signs of enterprise adoption, M&A, and more nuanced discussion about hybrid computing highlight how the cloud has matured. It’s no longer zero sum; it’s more of hybrid being the norm. Add it up and 2018 will go down as the year the cloud matured.